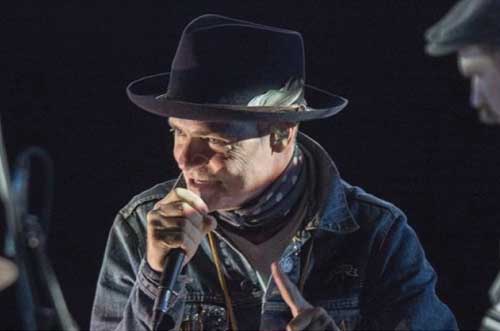 TORONTO — A brother of the late Tragically Hip frontman Gord Downie says a weekend benefi tconcert performance of his “Secret Path” album was a “powerful” show and he isn’t ruling outmaking it an annual event, possibly in different cities.

The Secret Path Live show was a recreation of the original October 2016 concert, which Downieperformed after revealing he had been diagnosed with terminal brain cancer. He died on Oct. 17,2017.

“It was so powerful, so … I would love to do it again, but maybe we’ll have to try it in a different citynext year or something,” Mike Downie, who is a documentary fi lmmaker and co-founder of theDownie Wenjack Fund, said Sunday in a phone interview from Toronto.

“It would be great. The Downie Wenjack Fund is a national charitable organization, so it probablywould be a good idea to not just keep popping up in Toronto.”

But Downie said there is no concrete plan in place to make it an annual event, noting it was a lotof work to put together.

The show marked the fi rst time members of the “Secret Path” band — who include Kevin Drewand Kevin Hearn — had performed the album together since the 2016 show with Downie.

“I heard from a few people that they felt the presence of Gord while they were going back tothese songs that they hadn’t performed since the last time, which would have been with Gord,”said Downie.

“Leading up to it it really felt like, ‘Wow, this would be pretty hard to do every year.’ Then when theshow starts, it’s a really powerful experience for everybody in the audience, and halfway throughthe show you’re thinking ‘Oh, we have to do this again.”‘

The multi-platform “Secret Path” project tells the story of Chanie Wenjack, a 12-year-old Ojibweboy who died while trying to escape an Ontario residential school in 1966. The initiative aims toraise awareness about Canada’s history of residential schools through music, dance and art.

Saturday’s show also saw comedy star Bruce McCulloch of “The Kids in the Hall” read a letterhe had written based on correspondence he’d had with Downie, with whom he was friends.

National Chief of the Assembly of First Nations, Perry Bellegarde, performed a drum song withsome of his friends.

Wenjack’s sister, Pearl, sang a prayer song while other members of the family sat in theaudience.

The event capped Secret Path Week, an annual initiative involving various tribute shows andactivations with the Downie Wenjack Legacy Schools Programs, which aims to supporteducators with lesson plans about Indigenous culture. That program started a year ago as apilot project in 200 schools and has expanded to over 1,300 schools, said Downie.

Downie didn’t have fi gures on how much money was raised on Saturday but felt it was asuccess in achieving their goals of raising awareness about reconciliation.

“We are trying to get more and more Canadians interested, involved, committed to reconciliation,everyone in their own way,” Downie said.

“When you have a roomful of people like that, I hope it inspires Canadians from coast to coastwho hear about it, who see the video that will be out there, that there’s a place for everyone inthis movement and it’s going to take literally millions of us to really make a signifi cant impact onreconciliation.”