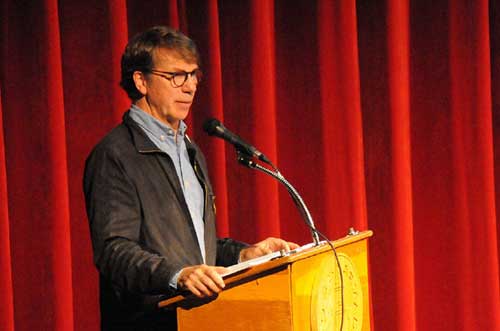 Mike Downie hopes the story of Chanie Wenjack, who died50 years ago trying to return home from residential school innorthern Ontario, will live on through the words of his latebrother, Gord Downie, of The Tragically Hip.

The Downies worked on The Secret Path, a multi-mediapresentation featuring a graphic novel, 10-song album andanimated fi lm that tells Chanie’s story through GordDownie’s words. The album was released just before Gorddied of brain cancer on Oct. 17, 2017.

“He was wonderful with the kids, taking time talking to themafter the show and taking photos,” ADSS principal RobSouther said.

“He’s a storyteller. There’s clearly the Downie family traithere; they (Mike and late brother Gord) can tell a meanstory.”

Downie helped the students focus on the intangible conceptof reconciliation, giving them a way to understand it on theirlevel. “It wasn’t one of those guilt and blame kind of shows.It’s hopeful,” Souther said.

The reaction “is going to be diff erent for every student,” headded. “It brings home something that maybe they didn’tunderstand that well. For me, what Secret Path was, wassomeone has an emotional connection with Gord and theHip…it’s refocusing that dialogue in the mainstream.

“It did make it more real.”

Making it real is exactly what Mike Downie hopes to achievewith his Secret Path tour and Legacy Schools program ofeducators committed to reconciliation.

“When you start to think about it a little more you realize theresiliency of this culture. I hope it’s just going to get stronger.I believe it’s going to become a huge part of what Canadiansthink of who we are,” Downie said.

“I’m excited these kids are learning about the real history ofCanada. My brother Gord was the kind of guy, he was neverafraid of the tough conversations. He was a courageous kindof guy. This story of Canada is not very nice. It doesn’t showus in a fl attering light, clearly.

“But that doesn’t mean we should turn away from it either.It’s the same thing for a nation as it is for an individual.You’ve got to look at yourself in the mirror, you’ve got to lookat your faults and you’ve got to come to grips with it. If youdon’t, there’s literally no chance of making any kind ofprogress whatsoever.”

Downie said students he has met through his schoolpresentations have a greater awareness of what happened inthe past, and says he is hopeful they will build on what theyare learning. “It’s going to change this country,” he said. “It’sgoing to make it a better country.”

Educators from around Vancouver Island also had theopportunity to attend the public presentation of Secret Pathon Friday, Oct. 25. Fifty-eight members of the VancouverIsland School Trustees Association (VISTA) were in PortAlberni for two days of workshops and activities, and they alllistened to Downie’s presentation. 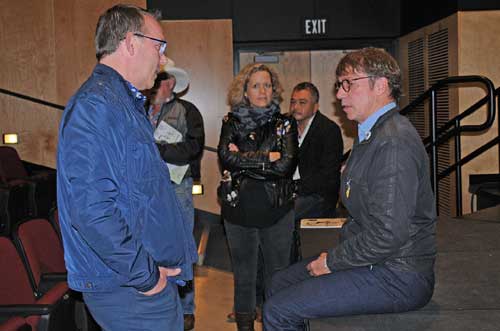 Mike Downie, right, speaks with people who attended his presentation of SecretPath, a multi-media project he worked on with his late brother, musician GordDownie, that tells the story of Chanie Wenjack. Chanie was a boy who died 50years ago trying to return home from residential school. SUSAN QUINN/AlberniValley News 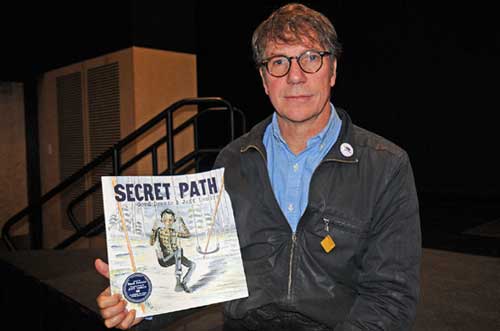